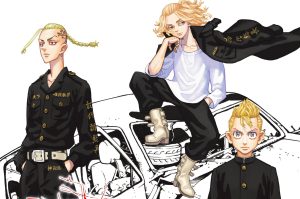 Takemichi Hanagaki is a young man who has little success in his life. An uninteresting job, a tiny apartment and no passion. He sadly learns of the death of his first, and only, girlfriend in a brawl between local gangs. Remembering his college days, he falls to his death in front of the metro, but instead of dying, he returns exactly 12 years in time. Reliving the best years of his life, he vows to try to make a difference by saving the beautiful Hinata Tachibana. In order to do this, he must understand his strange time-jumping power and learn about the events that led the Shibuya gang he knew to become the murderous Tokyo Manjikai gang who would inadvertently end Hinata’s life.

The author and his biography

Ken Wakui made his debut in 2005 with Shinjuku Host published in Bessatsu Young Magazine and his first series Shinjuku Swan was published the same year in Weekly Young Magazine. In 2015, he moved to Weekly Shonen Magazine with Desert Eagles and started Tokyo Revengers in March 2017.

To date, 23 bound volumes have been published by Kōdansha Publishing in Japan. Glénat publishes the bound tomes in French while Kōdansha offers to purchase the English version tomes online.

Discreet and solitary, Ken Wakui does not particularly enjoy working with editors or assistants.

In 2020, the manga won the 44th edition of the Kōdansha Manga Prize in the shōnen category.

Takemichi Hanagaki, an anti-hero who catalogs himself as a “loser,” struggles from the moment he finds a goal in life: to try to save his first love thanks to his mysterious power to return to the past. Investigating sometimes in 2005 and sometimes in 2017 to find a way to change his story and that of Hinata Tachibana, he is helped by her brother, Naoto Tachibana, who believes in his power and accompanies him in his quest.

Hinata Tachibana is cheerful with a strong character and very popular. She loves her boyfriend Takemichi very much even if she reproaches him for constantly fighting. She notices his new maturity and appreciates it, but doesn’t change her behavior.

Naoto Tachibana, a believer in Takemichi’s time travel story, will find him after becoming a police officer, 12 years later, to help him understand his power and make the best use of it.

Atsushi Sendo, great friend of Takemichi, is the leader of the small band of college students. His future is the first to be changed due to Takemichi’s actions and choices.

2017 = Mafia gang that largely rules the city of Tokyo, responsible for numerous crimes, murders, thefts and other abuses.

Manjiro Sano a.k.a The untouchable Mikey, a true ace in combat, his natural charisma allows him to command respect. He wants to revive the golden age of Bosozoku and other motorcycle gangs in honor of his late brother.

Ken Ryuguji a.k.a Draken, number 2 of the 2005 Tokyo Manjikai, he guides & focuses Mikey while idolizing him. With a calm and measured temperament, he is the perfect second for the impulsive Manjiro Sano.

Tetta Kisaki, formerly leader of a rival gang of Tokyo Manjikai, her meeting with Manjiro Sano marks a change in the organization’s hierarchy. His attitude and virulence influenced the Tokyo Manjikai, which he would command with violence. Takemichi will try to prevent his path from crossing that of the gentle Manjiro of 2005.

A 17-episode anime adaptation premiered in June 2020, directed by Koichi Hatsumi who previously worked on the Deadman Wonderland adaptation.

A live-action film was released in July 2021 in Japan, and a theater adaptation in Tokyo, Osaka and Kanagawa is scheduled for August 2021.

A Memory Game App: Tokyo Revengers Onet Connect Game has been released on Google Play while a game is reportedly in the works for likely release on PlayStation, Xbox, PC, and Android.

Ken Wakui effectively uses time travel with an easy to understand concept of linearity, which is not so common in works of the same genre. The storyline of Tokyo Revengers, like its character Mikey, brings us back to the heyday of the bad boy, thug and biker era of 1980s Japan.

Beneath its allure of love and rescue story, Tokyo Revengers has its fair share of dark sides: ransacked, suicides, beatings, etc. that Ken Wakui manages to alleviate by making us discover a Bosozoku gang not so “bad” as that. A contrasting lightness that only reinforces the stakes of this journey through time.