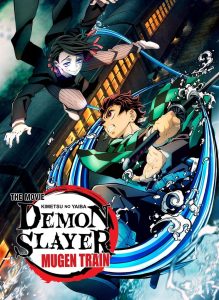 Welcome everyone to this first edition of Review Japanime! As it just released on the big screen in North America about two weeks ago, Demon Slayer: Mugen Train has already broken world records in profits, dethroning Spirited Away with a historic income of over $469 million US dollars and it’s still going up! Some of you have seen the movie in theaters before and been part of its success, but this edition will still be spoiler-free for those who haven’t seen it yet.

On Rotten Tomatoes, its tomatometer score is 97% and his audience rating is 99%, proof that fans are extremely satisfied with this opus. So let’s talk about its strengths and weaknesses!

First, unlike most films on other great Shônen manga like Naruto or One Piece, Mugen Train is a canon film, that is to say that its story is a continuation of the manga, adapting volumes 7 and 8 of it. Which also means that reading the first volumes of the manga or watching season 1 of the anime is more than recommended to fully understand the story. So why did you take this arc out of the manga in film rather than in episodes?

Several reasons may well explain the choice of Ufotable’s animation studio. First, having directed the Fate / Stay Night film trilogy, it isn’t Ufotable’s first attempt when it comes to animated films. The film format, unlike the animated series format, is much more profitable and allows the studio to generate significant profits for the rest of its projects, thus it can potentially finance the production of a second season Demon Slayer anime. for example. Given the overwhelming success of the manga, the rights to broadcast Demon Slayer’s season 1 were immediately obtained by Crunchyroll, Funimation and then Netflix a year later, and the success of the film was to be expected. As the film was announced at the end of the last episode, the film’s release was therefore a long-standing project. Ufotable, responsible for the animated series Fate / Stay Night: Unlimited Blade Works & its film trilogy, is a studio whose quality of animation is readily appreciated on the big screen.

But then, how does the experience of a film in the cinema compare to an animated series at home? One of Ufotable’s subtle strengths in its designs is the setting. Indeed, it aims to be as detailed as possible and is a rework of real photos rather than an imagined & decorative scene which brings great realism to its frames. More than the setting, the characters, being taken from a Shônen manga, tend to have simplistic facial features. From the first scenes, we realize the meticulous effort to counter this challenge, via the shading on the characters, who are no longer simply colored according to the color of their skin. With the decor style that complements this light and shadow dimension, there is a certain feeling of a real photo.

The second great strength of cinema is its immersive sound. Not everyone has a surround sound system in their home that allows them to feel, for example, that the lyrics are coming from the left when a character is on the left of the stage. In addition, being able to make the sound loud enough makes the music particularly epic. This is probably the most enjoyable part for the spectators, since every important moment a character puts on a performance is accompanied by an explosive and unique soundtrack, which makes the moment even more memorable.

The battle scenes, which are the great strength of the Ufotable studio, are once again a pleasant surprise to savor. Rather than a simple succession of moving images, we often follow the characters in their movements with an added effect of depth, as if the camera were moving to better follow the character, which creates an effect of immersion and dizziness during action scenes which are a real feast for the eyes. This vertigo effect is all the more powerful since the story takes place in a moving train. The shots of the fight scenes are also mostly inside the train and at the height of the characters, allowing a somewhat claustrophobic immersion for the viewer.

But in this case, is this movie perfect? Well, almost! Certainly, there are not any defects with which to fault it with. Fans of the manga got exactly what they wanted and more thanks to the painstaking work of Ufotable. The only slightly regrettable points are that if you haven’t read the first volumes of the manga, the story will be very difficult to follow, unlike the usual Ghibli or CoMix Waves animated films which have stories introduced early on. Animation wise, the few 3D animated elements can look a bit awkward since everything else is in a very manga 2D style. The film also follows the manga in great detail. A few bonus scenes are added, but nothing new on this side. There is also no post-credit scene, which keeps things going next for the Demon Slayer franchise.

That’s it this time for the Review Japanime! If you liked this movie and can’t wait to see what happens next, then book 8 is where the story begins again. All released tomes are currently available at your favorite bookstore, O-Taku Manga Lounge!

If you’ve watched this film, please let us know in the comments section. In the meantime, see you next time for future Japanime Reviews!