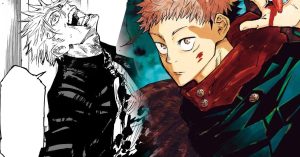 When the negative emotions of humans become concentrated, it births a Curse. These demons are therefore more generally born in places full of strong feelings, such as schools or hospitals. These Curses can only be fought with more powerful Curses or exorcists. This is why relics, receptacles of Curses, are kept in this kind of place.

Yūji Itadori is a high school student with no history, albeit unusually strong. Wanting to save his fellow high school students from the Spiritism Club after they broke the seal of an S-rank relic, a finger of the mightiest Curse, the demon Ryōmen Sukuna, Yūji will absorb Sukuna’s strength by … eating the relic! First condemned to death by the high authorities of the exorcists, his control over Sukana, whom he did not manage to fully possess, gives him a reprieve as well as a mission: he will have to learn the exorcism and find the 20 fingers of Sukuna to eat them before stepping on the scaffold, ending the threat of this Curse.

Created in March 2018, the Jujutsu Kaisen series is ranked the same year on the Honya Club site in 1st place in the category “comics recommended by employees of Japanese bookstores”. The work is also nominated for the 65th Shōgakukan Prize in the shōnen category in 2019.

Prior to its anime adaptation in October 2020, the manga had already sold 8.5 million copies. As of May 2021, more than 50 million copies of Jujutsu Kaisen were in circulation. The adaptation received the title of “Anime of the Year” at the 2021 Crunchyroll Anime Awards and the saga was named 31st in Da Vinci magazine’s “Book of the Year” series in 2021.

Currently, 16 volumes of Jujutsu Kaisen have been released in Japan, plus a prequel, called Jujutsu Kaisen: Tokyo School of Exorcism. The series is published by Ki-Oon in the French version and Viz Media for the English version.

Yūji Itadori, a young college student forced to fight against a Curse, he swallowed a relic to become stronger. He is saved and helped by the exorcist student Megumi Fushiguro as well as his master, Satoru Gojō. He does not fall under Sukuna’s grip after eating her finger which allows him to make a deal with the exorcists: learning their techniques and hunting down the Plagues with them while eating Sukuna’s fingers as they go. they will find them. When they have the 20, he will accept to sacrifice himself to eradicate the king of Curses.

Nobara Kugisaki, a new second grade student at Tokyo School, aspires to a luxurious life in the capital. She accompanies Yūji and Megumi on their first mission together. She wields a hammer and nails as well as a voodoo doll to exorcise demons.

Satoru Gojō, an extremely talented exorcist, considered one of the strongest in the business. He is a professor at the Tokyo School of Exorcism and it is he who convinces his superiors to give Yūji a chance.

Kento Nanami, former employee, class 1 exorcist who will train Yūji. He fights with a sword enrobed in a seal.

Masamichi Yaga, director of The Tokyo School of Exorcism, he has the power to create and animate puppets to fight the Curses.

Suguru Geto, a mysterious character who spawns with curses. He seems intelligent and manipulative, it is not known whether he is a former special class exorcist or a demon.

Mahito is a dangerous and sadistic curse who looks like a young man. He can control souls and bodies and thus change his form. He experiments on humans and places no value on life.

Sukuna, the Two-Faced Specter, this four-armed demon was never beaten during his lifetime, his 20 fingers were cut and sealed to make them powerful relics until one day it would be possible to destroy him permanently. He doesn’t appreciate being the “guest” of Yūji’s body.

Gege Akutami, was born in 1992 in Iwate Prefecture, Japan. He admires the works and characters of mangaka Yoshihiro Togashi (Hunter x Hunter, Yuyu Hakusho). He is the student of Yasuhiro Kano (the creator, among others, of M × Zero and Kiss x Death) before embarking on his first manga in 2018 with Jujutsu Kaisen. He wrote a prequel to his series, in one volume: Jujutsu Kaisen 0: tokyo toritsu jujutsu kōtō senmon gakkō.

With the author having health concerns, the series is in a state of hiatus in 2021.

The first season of the animated series consists of 24 episodes released in 2020. A mobile role-playing game was announced in June 2021. There are two light novels written by Ballad Kitaguni, the first; Jujutsu Kaisen: Soaring Summer and Returning Autumn released on May 1, 2019 and the second, titled Jujutsu Kaisen: The Path of Roses at Dawn on January 4, 2020.

If the universe of demons, called Curses in Jujutsu Kaisen, and the fighting techniques explained in Naruto are not new, they are nevertheless perfectly mastered by the author. We quickly understand what will be our hero’s quest and his search for “macguffins” (relics) that will make him stronger and stronger. The variety of characters, both on the side of the protagonists and the antagonists, helps infuse a certain freshness and intensity into the exchanges and dialogues. A thrilling and successful first work from a young mangaka.