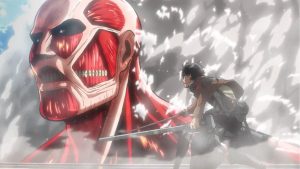 What is it about ?

The world no longer belongs to humans, gigantic creatures called Titans who dominate it instead. Measuring between 3 and 15 meters, these monsters forced humans to take refuge behind three concentric walls measuring fifty meters high. Behind these almost sacred ramparts, humanity tries to survive and organizes the reconquest of its territory thanks to its armed forces. These are divided into three branches: the garrison which protects the Walls and their inhabitants, the exploration battalion which ventures beyond the protections of the city and the special brigades which are under the orders of the king at the center of the fortifications. Gradually regaining hope thanks to the protection of the ramparts and to technological advances such as rechargeable blades and three-dimensional maneuvering equipment, humanity’s ambitions are humbled the day a 60-meter Colossal Titan appears and destroys one of the entry gates to the first wall …

Young Eren Jäger and his friends, Mikasa Ackerman and Armin Arlelt, witnessed the assault on the Colossal Titan that further reduced the size of the humans’ territory. Growing up and training hard, they joined the 104th Training Brigade and enlisted in the Exploration Battalion, decried as a waste of time, money and people by the population. Inspiring and motivated, Eren believes there is a way for humans to take back the world, but all will change in a clash in which his abilities are awakened to protect his comrades and his city. Eren will then represent one more step in understanding the origins and the will of the Titans and he will become in spite of himself a political and military cog, sometimes a bearer of hope, sometimes treated as an outcast in the fortress city.

In 2009, Attack on Titan was featured in the monthly Bessatsu Shōnen Magazine. The first hardcover volume appeared in 2010 and the 34th volume was released in June 2021 in Japan. The English version is published by Kodansha Comics in North America and the French version by Pika, in the Seinen category.

Eren Jäger, eager to exterminate all titans after seeing his mother get eaten by one of them, he always wanted to join the Exploration Battalion and will prove himself worthy. He is the son of Doctor Grisha Jäger who left him a legacy laden with secrets by bequeathing him extraordinary abilities.

Mikasa Ackerman, having been taken in by the Jäger family following the murder of her parents, she follows Eren to protect him. With a cold temperament and a combat prodigy, she will stand out for her extraordinary abilities.

Armin Arlelt, less robust and resilient than his two best friends, he more than compensates with his sense of observation and his analytical mind. Needing his friends to motivate himself in order to push his limits, he proves to be an excellent strategist.

Levi, renowned member and recognized as the most powerful soldier in the army of the walls, the Chief Corporal lacks diplomacy and tact, despite his excellent combat skill.

Like his characters, Hajime Isayama is a prodigy but manga for his part. It was only 19 years old that he imagined and designed a one-shot on the universe of Attack on Titan. Not having wanted to modify his story despite the request of the Weekly Shōnen Jump, he submitted his work to another editor and then worked with him on two one-shots: Heart Break One and Orz in 2008 before embarking on his series Attack on Titan that ended this year.

The series has been adapted into a 4-season anime, several OVAs and animated films.

A two-part live movie was shot in 2015, and an American adaptation was officially announced in October 2018.

Several light novels have been written:

In 2014, a crossover was created with the Marvel universe and we see in Attack on Avengers, a New York devastated by the onslaught of Titans against whom the Guardians of the Galaxy and the Avengers will fight.

Several video games ranging from collectible cards, mobiles and visual novels to action games for Nintendo DS and Playstation have been created.

Attack on Titan shuffles genres by offering a Shakespearean work in a post-apocalyptic steampunk universe. Mixing the canon of giant mechs and zombies, Hajime Isayama created remarkable antagonists with the titans. Along with the physical and palpable horror of comic situations that might make us look away, is added the psychological and intellectual terror that the author makes us feel through his characters. It becomes difficult to stop reading when you start Attack on Titan. Between political, military, religious intrigues, questions about humanity and the Titans’ chases, this manga perfectly captures the pangs of agoraphobia.

We recommend Attack on Titan to those who enjoyed the vicissitudes of Games of Thrones and who want to rediscover the suspense and fear of losing the characters they are attached to in a manga. Adding “titanic” fight scenes with an art-style that continually improves over the volumes, results in a Seinen saga that you will have to know!