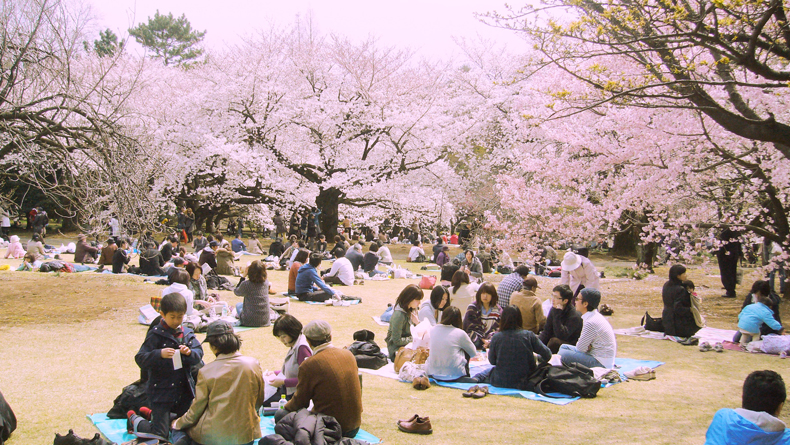 Hanami is a Japanese tradition that philosophically reflects the beauty of ephemerality. Each spring, when the Japanese cherry trees, or sakura, are in bloom, millions of people travel to urban parks or to the countryside to admire the delicate pale pink flowers that will only last for a few days.

Hanami literally means “to admire the flowers”. The word comes from hana (flower) and miru (to look). This custom, of Chinese origin, is still deeply rooted in Japanese society today.

In Japan, sakura are sacred trees. The flowering period lasts only a dozen days, corresponding to the ideal rice planting season. It is therefore quite natural that the tradition of making offerings to the kami (“gods” of the Shinto religion) at the foot of the blossoming sakura was established in the Middle Ages to attract good harvests for the coming season. Then, an emperor in the Edo era made this custom a national holiday. In the beginning, the festivities, made up of dances, plays, and other cultural events washed down with sake, were reserved for nobility. Then the tradition spread to the samurai class and finally became popular with the common folk.

These festivities continue today! Each year, millions of amazed Japanese tourists travel from park to park, from tree to tree, from region to region to admire this natural wonder. Obeying the most famous of clichés, they also take tons of photos!

And this annual event is certainly magical! Both the ground and the sky are covered with pink or white petals that gently fall like snowflakes, softly enveloping deep black tree trunks and branches of sakura trees.

The phenomenon also attracts tourists from all over the world who leave with stars in their eyes.

This fascination with Hanami is closely linked to the importance of the transience of life in Japanese culture. Living on an island, accustomed to natural and human disasters, the Japanese are very aware that their presence in this world is not eternal. Unlike Western culture, which censors everything related to death to the extent that we forget that it will eventually come for us all, Eastern culture, or at least Buddhist and Shinto cultures, live with a full awareness of death. This awareness of the impermanence of life, ironically, is a constant preoccupation among the Japanese people. Don’t we say that the Japanese eat their favorite dish first in case an earthquake prevents them from finishing their meal?

The short flowering period of sakura, associated with its enchantment and ephemerality, is therefore representative of this feeling, and, therefore, very important to the Japanese.

Besides being an occasion to admire and photograph trees, the Hanami is also an opportunity for the Japanese to upset all established social codes. The best example of this ephemeral rebellion are park picnics. Traditionally, it is not polite to eat out, and is not done often. But during the Hanami, everyone spreads out huge blue tarps layered with food, beers and barbecue under the blossoming trees, in order to celebrate the renewal of nature. Whether with family, friends, or even colleagues during a lunch break that is much longer than normal, cheerfulness is the order of the day and alcohol flows freely! A funny anecdote: people take off their shoes to walk on the tarps, as if they were coming home!

Street food festivals are also organized, red lanterns installed in the trees, as they are in the famous Ueno Park for example, where swan-shaped boats point the tip of their noses in the flooded moats of the Imperial Palace. During Hanami, the entire city of Kyoto is decorated with lights and enchanting garlands.

Mountain hiking is also very popular. Tokyoites, among others, set off in huge waves by shinkansen or by bus to climb the Kansai Mountains, covered with flowering trees, and picnic at the top. This results in hikes where you actually end up losing that ‘alone in nature’ feeling!

The international reputation of Hanami is such that this tradition of meeting with friends for a picnic under the cherry blossoms has even started being exported to other countries.

In manga, the representation of Hanami is very present, at the perfect intersection of Japanese tradition and modernity. Whether it is a romantic date under the blossoming sakura, a renewal of nature symbolizing the beginning of a new life, or even the celebration of a certain part of a character’s life, if you read manga, you’ve definitely encountered the Hanami!

Card Captor Sakura: While not technically about spring or cherry blossoms, the series’ young heroine is probably the best-known ‘Sakura’, so it’s a must on this list.

5 cm per second: adapted from the animated film by Makoto Shinkai, a collection of short stories where a pair of lovers are separated, and the young boy begins his first trip alone by train through all of Japan to find his lover. Did you know that 5 centimeters per second is the speed at which sakura petals fall to the ground when they come off the branches? A rather melancholy metaphor!

The Land of Cherry Trees: on the same theme as The cherry trees in spite of everything, but whose story takes place in 1945 in Hiroshima.

Emanon: a very special series with a clean graphic design that features a young girl who is several million years old and carries with her all the memories of humanity. In it, the enigmatic Emanon meets a man who claims to be her husband in the future.

Korosareru nara, Isso Sakura no Ki no Shita De (Kill Me Under the Cherry Trees Instead) : Life must go on anyway when a young girl is accused of having driven her best friend to suicide and faces exclusion on a daily basis.

Ao Spring Ride: Through the talented Io Sakisaka (Strobe Edge), a young girl reunites with her childhood sweetheart but he has changed his name and seems to no longer remember her